Underneath the retina are two pigmented membranes, the retinal pigment epithelium and the choroid. These two layers contain a pigment similar to that in the skin, called melanin.

When pigment containing cells clump up together in the skin then they are called freckles or moles. If, as in cancer, the pigment cells start to develop irregularly and become malignant then this is called melanoma. Similarly these freckles or moles and melanomas may occur within the eye. Choroidal nevi are the term for freckles and moles in the choroid. Although it is uncommon, choroidal nevi can turn into a choroidal melanomas. 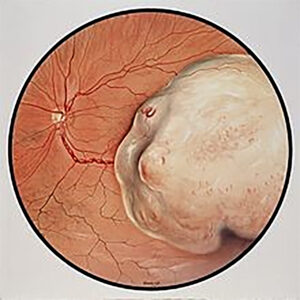 A retina specialist will be able to diagnose the choroidal nevus based on exam. Whenever possible, choroidal nevus size should then be documented and assessed using exam, fundus photography and ultrasound. If there is a significant change in size of the nevus then there is always concern about it turning into a choroidal melanoma.