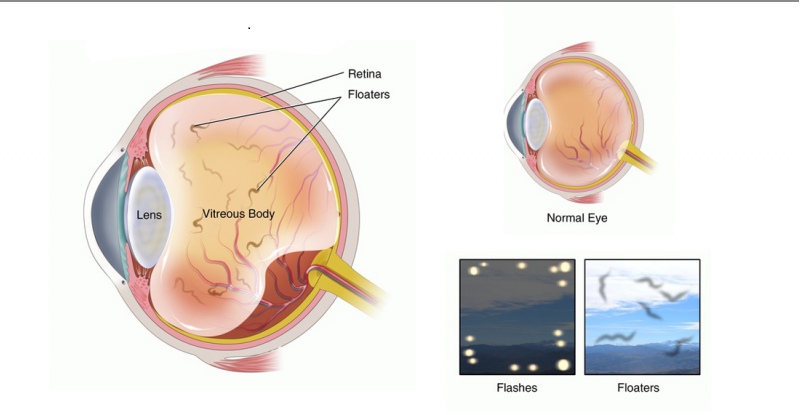 Much of the inside of the eye is filled with a clear, thick, gel-like substance called vitreous. This is attached to the retina and optic nerve. As we age, the center of the vitreous gel slowly becomes more liquid-like. Vitreous with a liquid center eventually collapses and separates from the retina. When this separation happens then the fibers inside the vitreous can become dense and noticeable. These fibers often appear as “floaters” and some people describe it as as black spots or spider webs floating in the field of vision. Sometimes this is associated with “flashes” of light which may appear as lightning. These “flashes” occur due to the effect of pulling or traction of the gel on the retina (the light-sensitive part of the eye) when the vitreous separates from the retina. This mechanical tension stimulates the retinal nerve cells to send electrical signals to the brain. The brain interprets this signal as light even in the absence of light.

Though vitreous separation does not usually threaten vision, sometimes vitreous fibers cause increased traction on the retina, causing tears in the retina. If left untreated these can lead to retinal detachment, which is a serious vision-threatening condition. Retinal tears and retinal detachment should be treated promptly. If left untreated, retinal detachment can cause permanent vision loss in the affected eye. Those with a sudden increase in “floaters” or “flashes” should be examined by a retina specialists as soon as possible. The only way to diagnose this is to do a thorough eye examination. If the vitreous detachment causes retinal tears or detachment then early treatment can help prevent vision loss.